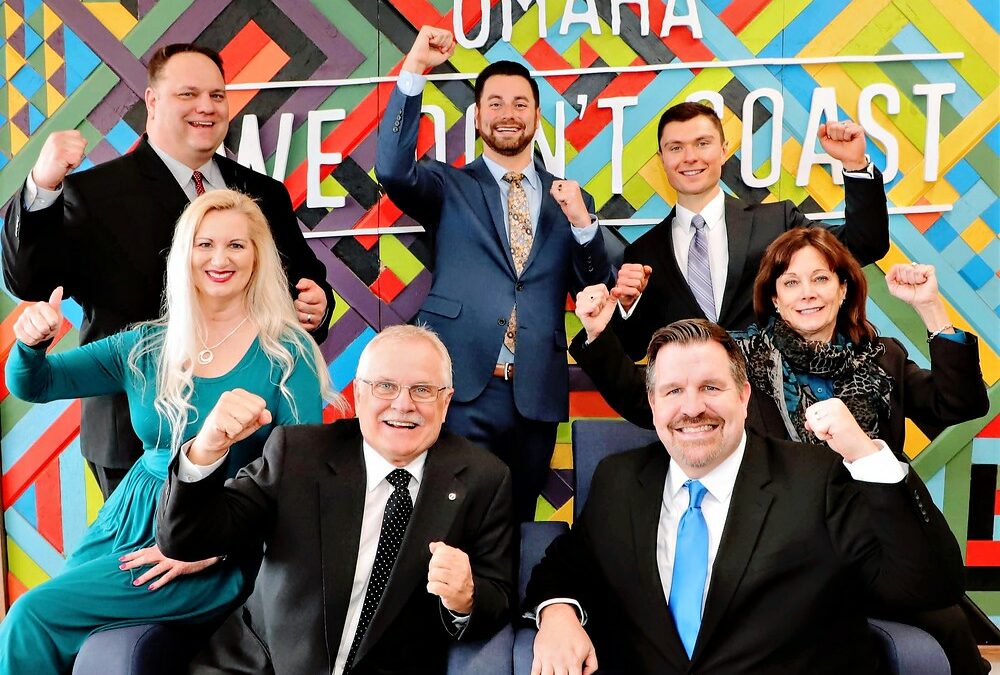 Comprised of job titles that span from dentists, attorneys, bankers, to retailers and many more, The President’s Club is an elite group of approximately 20 volunteers that help grow the Greater Omaha Chamber (the Chamber) by promoting local membership and renewal. Dave Johnson. senior sales executive with TSYS Merchant Solutions, said, “I’ve been in the group 19 years. We have a lot of fun in the President’s Club, and we have to work hard for it. With a vast amount of experience between them, these representatives are tasked with building community exposure and membership for the Chamber. According to Chief Sales and Marketing Officer for Holidynamics Erik Terkelsen, each member of the group “has their own sales style, so we are always learning from one another. Our group is very encouraging but competitive at the same time. I have made a lot of friends in this group and I am honored to be a part of it.” With almost four decades between them in the President’s Club, Phil Moyer, Vice President of First National Bank and Cheryl Anderson, a business developer with Leo A. Daly, agree that the group has developed unique relationships based on their time together. “We’re a competitive group, but it’s a good competitive,” said Anderson. “It’s like a family; we’re like brothers and sisters, and who doesn’t want to beat your brother?” Cheerful competition keeps members of the President’s Club coming back, as well as the chance to become an honored member of the Chairman’s Circle.

Top recruiters in the President’s Club are awarded each year with the distinction of joining the Chairman’s Circle. President of the Omaha Territory at Care Consultants for the Aging and Oasis Senior Advisors, Kyle Johnson, “started my business October of 2015 and became a Chamber member.” With a desire to be involved in the local community, he was invited to join the President’s Club, and eventually made it to the Chairman’s Circle. Jason Gustafson, prides himself on the achievement.  “I’ve won it every year since I’ve been in [President’s Club],” he said.

Janet Noll, a new member to the President’s Club, was also glad to be welcomed into the Chairman’s Circle. “It’s great,” Noll said. “It was so unexpected to be able to achieve that the first year …” However, she noted, “promoting the Chamber is an easy sell, because of all that they do for businesses in the area.” In turn, each member recognizes that when they succeed, their own businesses and the community surrounding them is affected in a positive way.

The greatest aspect of the President’s Club is their ability to network to a variety of groups. Anderson explained that she likes to research which aspects of Chamber membership might be most appealing for a given business, and Gustafson agreed, it “depends on the industry … We hold a meeting every other week and we try to host them at different restaurants that are members. It’s just a great way to expose them to 30 plus business professionals that may not have known about it before.” While some have this sales philosophy,

Moyer stresses that joining the Chamber is simply a wise investment, especially because of their many networking events. “It’s not an enormous cost to join for what you get out of it,” he said. “Even if you don’t attend the events, the Chamber is out working to make your business better and gives that seal of approval for local businesses.”

By promoting fellow Chamber members, not only does one business grow; the entire community grows along with it. Working behind the scenes to make every possible member connection, the Chamber does so much more than put on networking events. Runyan, a Financial Advisor, said, “I talk about what the Chamber does to bring other businesses to town, larger ones with lots of employees, which in turn drives people to their businesses, that kind of thing.”

Why Join the Greater Omaha Chamber?

Tim Riewer, now retired from Wells Fargo Bank, made it his mission to promote the Chamber and its goal of making the metro area, “a better place to work, live, and play.” Riewer worked to help the Chamber because of the way it helps Omaha win. As Runyan put it, “to be a successful business, just like any business, you have to provide a good product at a fair price and do it consistently. In Omaha, you don’t get many chances to mess that up. In Omaha, you have to be plugged in.” To do so, the Chamber continues growing what they have to offer to build partnerships, exposure, or simply networking opportunities for the business community. Johnson put it simply; “we all spend $400 on business cards; on print material. Nobody’s going to call me because of a business card.” Rather than carrying a pocketful of business cards, Chamber membership is a walking, talking business card.

How Do You Define Success?

When asked what success means to them, each member of the Chairman’s Circle had a different viewpoint. While many viewed successes in terms of membership goals for the Chamber or membership in President’s Club, others focus more on qualitative aspects of their duties. Nick Leinen, a client advocate, said, “doing good for others makes a winner and the Chamber gives businesses the tools to get involved. The economic development arm of the Chamber works to bring “big name” businesses to our area like Facebook, Google, Toast, etc. We all benefit from more customers!” When President’s Club members get to see a business grow and flourish, the feeling of personal reward is palpable, as well as knowing a business owner before walking through their shop’s doors. Gustafson said, “one of the businesses that I recruited won the Small Business of the Month; it was a really good experience to see them win the award.” With enough of this momentum, he continued, “if we can attract businesses, we can attract talent. We’re getting that talent; it’s only going to grow our community and make life better for everyone.”

Although Riewer is retiring from the group, President’s Club and its members have had a profound effect on him over his decade-long legacy with the group. “I will say that I have some friendships from the approximately ten years I’ve been doing this, that I am sure I’ll maintain. I have high respect for David Brown and Anne Branigan and all the wonderful Chamber folks that do just a wonderful job of trying to make Omaha truly a better place to live, work and play.” Terkelsen echoes his sentiments, saying, “I am proud of the community that I live in.  I believe that we have the best city in the USA. We have a lot of talented business leaders and employees throughout the city that are dedicated to the growth of our community.” With a hard work ethic, willingness to lend a helping hand, and a connectedness whose essence is truly unique, Omaha businesses help Omaha win. With so many headquarters now coming to the city and more on the way, “it’s really a place to grow,” said Anderson.