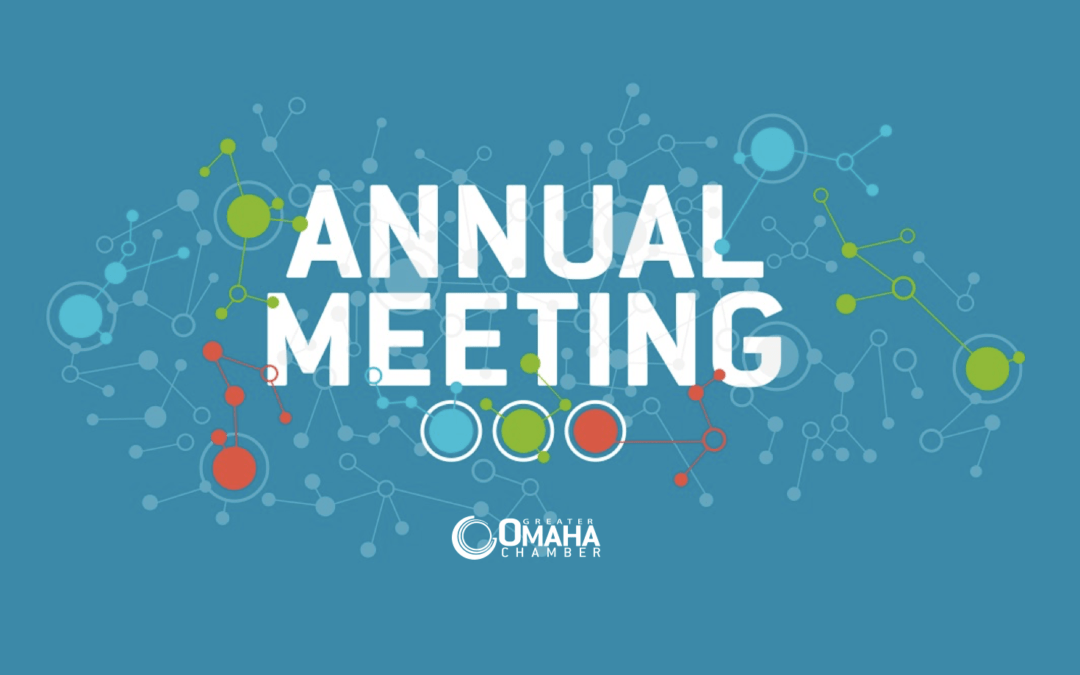 “Catalytic change agents and great leaders propel our community,” said David G. Brown, president and CEO, the Greater Omaha Chamber. “We look forward to recognizing the 2019 accomplishments of these community-enhancing institutions and individuals.”

The Chamber’s Annual Meeting will be held from 4 p.m. – 6:30 p.m., on Jan. 23 at CHI Health Center, Omaha. Tickets in open seating are $120 for Chamber members and $145 for non-members, and include parking, appetizers and drinks. Reservations are due Jan. 16, 2020. For more information or to register, visit omahachamber.org/am.

About the 2019 Honorees
Chairman’s Award of Excellence
Jason Gustafson, Vice President of Commercial Banking, UMB Bank
Jason has served as a middle market lender with UMB for the past two years. He has 18 years of banking experience in the Omaha and Lincoln communities and has been an active volunteer with the Greater Omaha Chamber for eight years – qualifying for Chairman’s Circle each of those years. He co-founded the Elkhorn Optimist Club, a nonprofit that serves youth in the Elkhorn area and is also is on the finance committee for the Douglas County Housing Authority.

Headliner of the Year
United States Strategic Command
U.S. Strategic Command is one of eleven unified commands in the Department of Defense and is solely responsible for deterring strategic attack and employing forces, as directed, to guarantee the security of our Nation and our Allies. The command’s assigned responsibilities include strategic deterrence; nuclear operations; nuclear command, control and communications; joint electronic spectrum operations; global strike; missile defense; and analysis and targeting. USSTRATCOM’s campaign sets conditions across the globe as the ultimate guarantor of national and allied security, and the command’s forces and capabilities underpin and enable all other Joint Force operations that provides national leadership a greater understanding of specific global threats and the means to respond rapidly.

Bay is active throughout the business and civic community. He currently serves on the Board of Directors of Heritage Services, the Omaha Zoological Society, Nebraska Medicine, The Downtown Riverfront Trust and The Robert B. Daugherty Global Water for Food Institute and is a Trustee of The Robert B. Daugherty Foundation, The Walter Scott Family Foundation and The Peter Kiewit Foundation.

Kenneth E. Stinson, Chairman Emeritus, Peter Kiewit Sons’, Inc.
Riverfront Revitalization Project
Ken Stinson earned a Bachelor of Science degree in civil engineering from the University of Notre Dame in 1964 and a Master of Science degree in civil engineering from Stanford University in 1970. He served as an officer in the U.S. Navy Civil Engineer Corps from 1966 to 1969, including two-and-a-half tours in Vietnam with the Navy Seabees.

Stinson began his career with Kiewit in 1969 and rose to Chairman and CEO. In 2012, he retired from his day-to-day business with Kiewit. He currently serves as chairman emeritus and is a member of the Board of Directors for Peter Kiewit Sons’, Inc.  In addition to Kiewit, Stinson currently serves on the board of directors for McCarthy Group, LLC and is an emeritus trustee at the University of Notre Dame.

About Greater Omaha
Greater Omaha is a No. 1 ranked up-and-coming-tech hotspot and Time magazine’s 2017 No. 3 Most Up-and-Coming City in America. Recognized for its “We Don’t Coast” attitude, and named America’s No. 2 Best Small City, Greater Omaha is home to more than 30 communities and nearly 1 million people, with a youthful population (more than 40 percent are age 24 or younger), low cost of living and steady economic growth that outpaces the nation. Berkshire Hathaway, Mutual of Omaha, Peter Kiewit Sons’ Inc. and Union Pacific – all Fortune 500 companies – call Greater Omaha “home.”