Adjournment at Last: 2017 Legislative Wrap Up 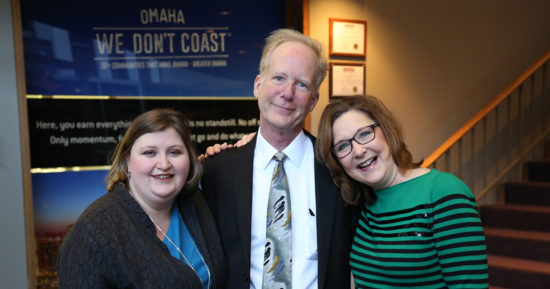 So how did it go? A senator at the Sine Die dinner put it this way. “Well, we’re all alive.”

The Legislature wrapped up the 2017 session on Tuesday, May 23, and senators did so by pulling off the seemingly impossible feat of adjourning four days early. (Think back to the beginning, when 30 days were spent on debating rules of procedure while legislation sat bumper to bumper waiting for a shot at debate time.)

There are years – particularly tight budget years – when just holding on is cause for optimism. But we did better than just hold on. Approved legislation includes that which will extend the Nebraska Advantage Tier 6 carryover period (Tier 6 is for bringing in projects with the highest investment and employee compensation levels); provide Sarpy County with a means for constructing sewerage infrastructure and opening up land over the ridgeline for development; remove barriers to professional credentialing of military spouses; step up road funding and project scheduling by allowing the state to administer arduous and time-consuming federal environmental regulations; and expanding business development programs to include bioscience development.

Just as important was defending tax policies that are key to business development. Aim was taken at site and building development funding, job training, angel investment, the historic property renovation credit and the capital gains exemption for stock acquired from one’s employer, and at increasing taxes for businesses with multistate income.  All remain intact.

It was another busy session in the Revenue and Urban Development Committees. We brought a major update of Nebraska’s economic development program (Nebraska Advantage). We supported a reduction of the top income tax rate (which impacts a large number of the state’s taxpayers, not just an elite few). We opposed measures to increase the sales tax rate and expand the scope of services subject to the tax and then shift revenues to the property tax credit. Our opposition was particularly focused on bills that would have erased every tax reduction, tax credit, and economic development incentive going back to 2005, and a few others going back to 1987. The annual slew of bills to restrict local tax increment financing continued, and we were among those voicing strong opposition.

For the time being, senators introduced 126 interim studies. Subjects range from income, sales and property taxes to tax increment financing, to motor vehicle taxes, to the more-controversial-than-you-might-think issue of licensing of individuals engaged in fields such as cosmetology, massage therapy and “body art,” to the curiously titled, “Interim study to examine the effects of nonstandard and volatile job schedules on Nebraska businesses, workers and families.”

So, January 4 seems about a hundred years ago.

As we predicted, they got through it just as they always do. By the quirk of the calendar, they’ll pick it up again come January 3 (the earliest possible date for convening a session).

A noted Nebraska statesman once put it this way: “This has been fun.” Chamber Public Policy does its best to follow his example.